Since the very beginning, in the late 1940s, when Continuus-Properzi began experimenting with lead and lead alloys to transform them through continuous casting and rolling into wire and very narrow strip, we have accumulated a tremendous amount of experience.

This helped us during the 1980s when Properzi collaborated with the Fiat group, specifically Magneti Marelli, to build the first expanded lead metal strip line for the production of automotive battery grids.

Grid production in the market is moving towards the utilization of punched grids requiring a wider lead strip, approximately 320 mm wide.

We have further developed and optimized the Casting and Rolling of wide lead strip (CRSw).

Here are some nominal capacities given in tons per hour (tph) and these capacities refer to the finished strip being collected on the coiler. Also listed is the corresponding wide strip speed in meters per minute (m/min) and the speeds refer to strip thickness = 0.85 mm:

The Properzi CRS Casting and Rolling Lines provide many benefits and features that are  unmatched in the market:

Now Continuus-Properzi is offering a special Technical Services to all Properzi Users that is delineated in three different options:

E-mail Consultancy – It is a fast “problem solving” approach based on information exchange via e-mail. The Customer will detail the issue to consultancy@properzi.it describing it in detail, clarifying in which specific cases it occurs and adding any meaningful pictures or additional information. Properzi will deploy its dedicated and qualified engineering/process team until problem resolution.

Remote Assistance Service – It is a direct point to point connection between Properzi’s control room and Customer Line PLC. To be used only when the need arises, it allows CP software and process specialists to operate on the Customer PLC in order to introduce any required adjustment/modification either to the software or to the working parameters. To enable the Remote Assistance Service a communication module has to be installed and connected to the Internet.

Technical Audit at Customer site – This requires dispatching Properzi’s specialist/s to site in order to assist the customer in resolving the most critical issues, the ones which cannot be addressed by mail and require Properzi’s physical presence on the Line. The Technical Audit will be quoted on a case by case basis by our Technical Consultancy manager.

With the above very minor investments the Properzi User can obtain: 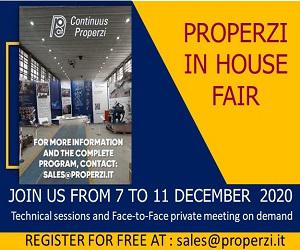